Scaling and root planing is a careful cleaning of the root surfaces to remove plaque and calculus [tartar] from deep periodontal pockets and to smooth the tooth root to remove bacterial toxins. Scaling and root planing is sometimes followed by adjunctive therapy such as local delivery antimicrobials, systemic antibiotics, and host modulation, as needed on a case-by-case basis.

Most periodontists would agree that after scaling and root planing, many patients do not require any further active treatment. However, the majority of patients will require ongoing maintenance therapy to sustain health.

Osseous Surgery is designed to modify and reshape deformities in the alveolar bone surrounding the teeth. It is a common requirement in effective treatment of more involved periodontal diseases. In some instances, the bony support of the tooth assumes an unusual configuration as a result of uneven progression of the disease. When this occurs, modification of the altered bone support may be indicated.

Gingival Flap Procedures, including root planing-per quadrant are used when...as pocket depth increases, exposing root grooves, concavities and the entrances to furcations, the effectiveness of close debridement procedures, as well as plaque control, decreases markedly. With moderate to deep pocket formation and continued loss of attachment accompanied by an inflammatory exudate, various flap approaches are indicated to secure access and visibility for corrective periodontal surgery and the removal of inflamed tissue.

A frenectomy is the surgical removal of a frenum in the mouth. A frenum is a fold of tissue that passes from the movable lip or cheek to the gum. When a frenum is positioned in such a way as to interfere with the normal alignment of teeth or results in pulling away of the gum from the tooth surface causing recession, these are often removed using a surgical process known as a frenectomy.

Gingivectomy and/or gingivoplasty are those surgical procedures that are directed at correction of the soft tissue (gingiva) around the tooth. Gingival deformities (particularly enlargements) are reshaped and reduced to create normal and functional form improving the health and appearance of the tissues. 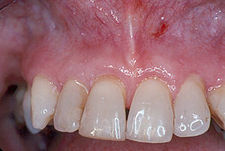 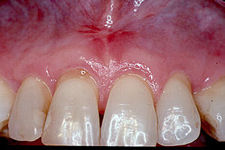